“In stand-up, the artist must have a fearlessness to reach into the emotions of ones life and gather the humor from the failures we accumulate to connect with and relate to our audience. Sandy gets this, and his journey will soon be rewarded”.
-Carl LaBove, 30 year Comedic Icon 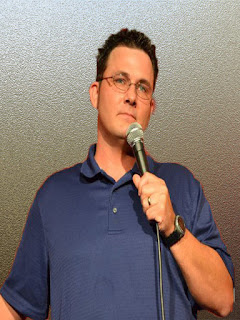 Sandy was born in Knoxville, TN with a built in Southern twang and smarts to match. His interest in comedy began when he was kicked off an elementary school field trip for telling dirty jokes to the other children. His popularity with his classmates continued to grow as his talent developed. When he reached adulthood, Sandy decided to join his father in the family business and began traveling the country, visiting dirt tracks as a race car driver. He poured his heart into racing, but the call of the stage was strong.

In February 2007, Sandy climbed on stage for the first time. As the performance wound to a close, a lady in the crowd shouted, “You ain’t funny. You need to kill yo’self,” and Sandy was hooked. He honed his craft, becoming a man possessed with the anatomy of a joke. He understands what funny is and how to lead the crowd to the laugh.

Sandy has had the privilege of working with several accomplished comics including Spanky Brown, Josh Sneed, James Johann and Mo Alexander, just to name a few. He has performed at Side Splitters, the Comedy Catch and on several Comedy Zone stages throughout the years. Sandy has competed in several comedy competitions. He reached the semi-final round in the Southeastern Funniest People Search at the Comedy Catch, competed in the Carnival Cruise Challenge at the Comedy Zone and won the Wild Card to Las Vegas event at Side Splitters Comedy Club.

Sandy’s comedy comes from a lack of understanding regarding his surroundings and it seems that the older he gets, the less he understands. Being married, raising children and dealing with family are currently his favorite subjects. He has been tagged the “Dysfunctional Dad” from some of his closest friends and he wears the moniker proudly. Many describe his comedy as a cross between having your eyes poked out and receiving an electric shock; but any way you look at it, Sandy is guaranteed entertainment.

Join Me On Social Media